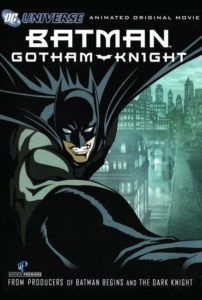 Though not released theatrically, Warner Bros. is advertising the direct-to-DVD release Batman: Gotham Knight as the sequel to Batman Begins, since it establishes a number of thematic undercurrents that blossom within Christopher Nolan’s epic sequel The Dark Knight. Existing as a passable yarn between the two live-action features, this group of six animated shorts elaborates on the film’s universe, delving into Batman’s development and growing stature as Gotham City’s defender.

Produced in part by Bruce Timm, creator of Batman: The Animated Series and Batman: Mask of the Phantasm, Japanese animators and writers from all over the comic and film fields amassed to give each of the six stories its own tonal and visual personality: A History of Violence scribe Josh Oslon penned “Have I Got a Story for You,” where skateboard kids share their eyewitness accounts of Batman (voiced by Kevin Conroy throughout), seeing him as a living shadow, man-bat, and pseudo-Iron Man. Next comes “Crossfire,” probably the least interesting in the movie, where a Gotham cop sour over Batman’s vigilantism learns to appreciate the hero. “Field Test” looks wonderful, but remains too simplistic, merely showing Batman try out a new bulletproof force field against the mob. Written by Batman Begins co-writer David. S. Goyer, “Darkness Dwells” is an action-packed story where Batman faces off against Killer Croc and Scarecrow to save a hostage. “Working Through Pain” is arguably the best short offered; here an injured Batman recollects when he learned to control his pain, which has since made him cold, numb, and somewhat self-destructive. Finally, Alan Burnett, writer of Mask of the Phantasm, delivers the exciting actioner “Deadshot.”

The Matrix movies already conceived an animated intermission title such as this, releasing The Animatrix on DVD to bridge the first and second film of its trilogy. Warner Bros. repeats their scheme, building upon the Batman movie interim with short stories helmed by six different directors (Yasuhiro Aoki, Futoshi Higashide, Toshiyuki Kubooka, Hiroshi Morioka, Shoujirou Nishimi, and Jong-Sik Nam). The problem remains that after viewing the bookend films, this interlude serves no dramatic purpose, and feels quite disjointed. These are throwaway stories, interesting or not on a case-by-case basis. As a whole, the product lacks a discernable path, leaving the audience lost as to what it all means.

Our sole purpose as viewers settles in appreciating the impressive (albeit pointlessly ornamental) Japanese animation, which lends great atmosphere to Gotham City but detaches us from Batman’s humanism. Take, for example, scenes in “Field Test” where Bruce Wayne is animated to appear like a twenty-something hipster, his hair dangling in his eyes. Conroy’s bold voice, even in its lighter Bruce Wayne tone, sounds too adult for the image. This is not a case of poor voice casting by Andrea Romano, who selected Conroy as an ode the 1990s television show; rather, a case of animation working against the story.

The ensuing 75-minutes worth of shorts is quite superficial in its connectivity to Nolan’s films. Characters and places don’t feel as though they originated from the live-action environment; they’re clearly based on some distant world unlike anything we’ve seen before. And while the animation is visionary, the resulting lack of association left me cold, even feeling a bit used by what is essentially a near-feature length commercial for The Dark Knight.

Maybe my desire and nostalgia for the long-since-off-the-air Batman: The Animated Series still burns in me too heartily to ignore. The show’s television run and subsequent movies (including SubZero and Mystery of the Batwoman) stand as mythos-defining, and so Batman: Gotham Knight, which involves so much talent from those earlier standards, feels like a meaningless let-down because of its jumbled thesis. Perhaps if producers set their combined efforts on a fully developed feature narrative the outcome wouldn’t have felt broken-up and insincere. Alas, aside from a moment or two of imagination, audiences will be scratching their heads, wondering what’s the point?