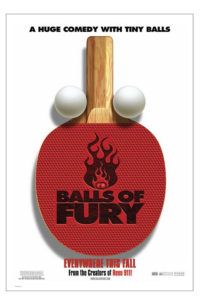 Lowbrow comedies allow you to shut off your brain, which is nice sometimes. You can sit back and observe funniness while your gray matter takes a much-needed rest. During that time, your brain is probably reading a good book or taking that painting class it has been meaning to take, meanwhile completely unaware of what your body is laughing at. A good Adam Sandler comedy now and again really does the trick (though there hasn’t been one of those in a while). And after 90-minutes (hopefully no more), your brain can wake up with no knowledge of what happened.

Your brain will not, unfortunately, be able shut off for Balls of Fury. Not because the script is so witty and sharp, but because your brain won’t be able to figure out what the hell is going on. It won’t know if it’s a parody movie, a kung-fu movie, or what. The movie bounces from genre to genre like, well, a Ping-Pong ball.

When sending-up Enter the Dragon and meshing it with the recent trend of comedic sports movies, most of which star Will Ferrell (Kicking and Screaming, Blades of Glory, et cetera), I doubt if Balls of Fury creators Ben Garant and Thomas Lennon of TV’s “Reno: 911!” knew what they wanted. Maybe there were some humorous ideas about a washed-up Olympic Ping-Pong champion that sounded funny, and then they watched a Bruce Lee movie and had what they believed to be a revelation?

Dan Fogler, a C-grade Jack Black or Chris Farley, plays Randy Daytona, a would-be child Ping-Pong champion who lost his big match and then made a fool of himself on worldwide television. Afterward, Daytona’s dad was murdered by Ping-Pong bookies. But nobody remembers that tragedy; instead, they just poke fun at his weight and crummy lounge: act hitting balls on a Reno, Nevada stage. There, he’s able to volley dozens of balls, even bouncing them off of people. Of course, they’re all CGI balls; it’s a trick they’ve been doing since Forrest Gump went to China.

Daytona is asked by FBI Agent Ernie Rodriquez (George Lopez) to enter an underground tournament organized by a Ping-Pong fanatic, crimelord Feng (Christopher Walken). Daytona agrees, as Feng’s bookies were the ones who killed his father. When Daytona attempts to freshen-up his skills at local competitions, he finds he’s lost his knack. How, in the span of a few hours, did Daytona go from miraculously bouncing balls every which way with perfect control on a Reno stage to being as unskilled at table tennis as you or me? That’s one of the many unanswerable questions to arise from viewing Balls of Fury.

Daytona is trained in by Master Wong (acting legend James Hong) and his attractive niece Maggie (Maggie Q). We get your typical student-in-training scenes where the trainee gets his wrists slapped for making mistakes and is subject to rigorous tortures for the sake of Ping-Pong. When he eventually arrives at Feng’s lair, he discovers the tournament is “sudden death”, which means Feng’s woman-servant (played by Aisha Tyler) shoots a poison-tipped dart into your neck.

Good news for young filmmakers! Apparently Christopher Walken will do anything now. So if you’re making a movie about diaper rash or the joy of peanuts, Walken will be in it, probably without even seeing a script. Perhaps he’s gotten too close to the “SNL” crowd after hosting every other week; what other explanation could there be for his recent string of stinkers? Not too long ago Walken was nominated for a Best Supporting Actor Oscar. Now he’s playing a cross between King of New York and Fu Manchu. Walken’s unabashed New York accent and silly dialogue turn his character, like everyone else in the movie, into a parody.

Surprisingly, Paul Rudd didn’t show up anywhere. His antics have been seen in a number of comedies as bad as Balls of Fury this year, most of them associated in some way or another with former castmembers of “The State” (again, Ben Garant and Thomas Lennon). Perhaps Hollywood is learning a lesson: scripts like this one are awful, regardless of talent in the cast. At least I don’t have to try and explain Rudd’s presence within this review…

The movie’s rules for Ping-Pong are absurd; most of them are so inconsistent they’re not worth mentioning here. Its players are rendered jokes, just as figure skaters in Blades of Glory or dodgeball enthusiasts in Dodgeball (take Thomas Lennon’s character Karl Wolfschtagg, who blows farts like a kiss with his paddle). More than anyone, Asians are depicted as Ping-Pong obsessed and kung-fu laden. Random, uninspired martial arts battles break out arbitrarily, taking themselves seriously within the context of this otherwise lampoon-of-a-movie.

Balls of Fury is a miserable, confusing, incoherent movie that doesn’t have a consistent voice. Comparing this movie to Blades of Glory is a must, since the two follow similar paths. I’ve been saying to myself that Blades is the better flick. I only now realized that it’s a sad, sad day when you resolve that one crappy movie is better than another crappy movie. Alas, as crappy movies go, this one’s pretty damn crappy.