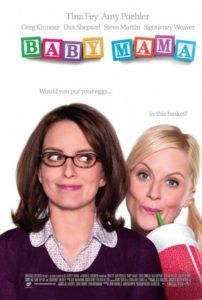 Baby Mama, written and directed by former Saturday Night Live writer Michael McCullers, is perhaps the most traditionalist comedy to derive from producer Lorne Michaels. No popular SNL characters revisited in movie form; only a smidgen of formulaic, sketch comedy-type humor. There are even some genuinely heartfelt moments scattered among the laughs.

Having tried everything from applying for adoption to artificial insemination, Kate (Tina Fey)—terminally single, 37-years-old, the vice-president of an organic food company—wants a baby. She’s desperate, sees babies everywhere, and smells them at random in elevators. Her last resort comes when she hires a surrogate mother through an agency. She’s paired with the slobbish pseudo-Neanderthal Angie (Amy Poehler), who will carry Kate’s fertilized egg for a standard surrogacy fee of $100,000, much to the pleasure of Angie’s dirty white-boy common-law husband Carl (Dax Shepard).

After the process is determined successful, Angie dumps Carl for his loose hips and shows up at Kate’s posh apartment with nowhere else to go. With a refrigerator full of health food and a plasma TV on the wall, Angie views the experience as a mixed bag. If only she didn’t have to give up Dr. Pepper! Needless to say Kate’s organized executive and Angie’s childish freebird lifestyles clash. But the setup is ostensibly their friendship’s “meet cute” device.

Enduring SNL-favorite Steve Martin, here complete with a long silver pony tail, makes a welcomed appearance as Kate’s New Age boss Barry. “I’ve toasted pine nuts on the edge of an active volcano,” he boasts. Certain of his own genius, Barry approves Kate’s new locale for their environmentally safe organic food store Round Earth Foods, and he rewards her with five minutes of silent, uninterrupted eye contact. Wayward from the straight and narrow path followed by the rest of the movie, Martin’s frequent brief appearances are some of the film’s funniest moments.

Indeed, we welcome cameo-laden detours from the central plot. Take Sigourney Weaver playing the surrogate company’s proprietor; she bravely makes herself the brunt of an ongoing joke because she still shoots out babies, while Kate gives her looks like she should be well into menopause. Romany Malco plays Kate’s mouthy doorman Oscar with two “baby mamas” of his own, only not by choice. And Greg Kinnear appears (once again) as a nice guy boyfriend, here the purveyor of a Jamba Juice knock-off. This makes me wonder: Did these stars agree to their bit roles because they’re fans of Fey and Poehler, or do they really need jobs bad enough to reduce themselves to cameos? Hopefully option number one.

Unlike other comedies populated by SNL alumni, McCullers’ movie doesn’t resonate with goofy detachment; we actually care about Kate’s quest for a baby. McCullers isn’t an acclaimed screenwriter (his previous work includes the second and third Austin Powers flicks). His prose is passable and he employs universal observations about pregnancy seen in other baby movies like Baby Boom, Nine Months, and She’s Having a Baby. The only difference is the newfangled surrogate setup, which has comedic (and dramatic) complication written all over it. His main trouble, however, is his bland directing, which would barely pass for quality television. Had McCullers played around more with the medium, his film might have been more interesting for the viewer visually.

Nevertheless, the result is easily watchable. Baby Mama is undemanding, funny, and doesn’t overstay its welcome—considering how frequently SNL skits run on too long without a chuckle from me, this came as a pleasant surprise. I like Tina Fey best on 30 Rock. I like Amy Poehler best on Upright Citizens Brigade. They may not be engaging in snappy dialogue or wild improvisational humor here, which disappoints considering their vast potential to do something original or perhaps more risqué, but they amply entertain with their first foray into starring roles.