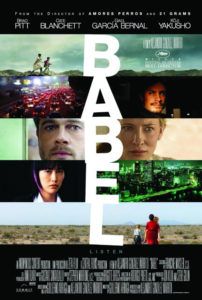 Mexican director Alejandro González Iñárritu is one of the famed members of what many are calling the “Three Amigos.” Along with fellow Mexican auteurs Alfonso Cuarón and Guillermo del Toro (whose films Children of Men and Pan’s Labyrinth, respectively, were two of the best films of 2006), Iñárritu makes an important piece with his new film Babel, despite being included into a mildly racist classification of directors. Recently voted Best Picture at the Golden Globes, it is Iñárritu’s best movie, in a style that has remained consistent throughout the director’s, so far, short career.

Iñárritu’s oeuvre reveres the work of Robert Altman (the originator of Iñárritu’s style—the mosaic film), and so it’s more derivative than the other two “Three Amigos.” Babel mirrors what he did with Amores Perros and 21 Grams, not to mention Altman’s own work on Short Cuts and Nashville. He constructs a braid of three intertwined stories, cut together out of temporal order, but in a dramatic logic. The stories taking place in Japan, Morocco, and on the Mexican/American border, all seemingly unrelated, but each a result of the other. Unlike Altman, whose mosaic films often tell a spree of stories, each with a different focus, just in the same environment, Iñárritu’s stories each begin and end where they should thematically, as the overall thesis is constant.

Babel’s three storylines revolve around communication, more accurately around language barriers. I won’t go into any detail in describing the plot, as mostly I would be describing three plots. For a brief idea, they center around the following: Brad Pitt and Cate Blanchett’s characters are American tourists in Morocco dealing with the country’s inability to provide quick medical attention, partly because of political and language constraints, when Blanchett’s character is shot by “terrorists.” In Japan, a young deaf girl struggles with her disability while she simultaneously manages her psychosexual and emotional problems stemming from her mother’s suicide. In Mexico, a nanny who takes care of Pitt and Blanchett’s characters’ children is forced to take the children into Mexico for her son’s wedding when the vacationing couple doesn’t return on time; getting back into the country, however, is more complicated.

All around, the acting is superb. Brad Pitt surprised me with his performance; he was actually acting. Pitt has been wearing on me lately with his ridiculous tabloid image and casual, cheeky performances in movies like The Mexican and Mr. & Mrs. Smith. For the last several years he’s been winking at the camera, not taking himself or his movies seriously. As likable as he is, even in the pleasant Ocean’s Eleven series, Pitt doesn’t stretch his abilities beyond a smile or an eye roll. With Babel, the Pitt from Seven, 12 Monkeys, and Snatch that we all know and love, returns. I forgot about Pitt’s celebrity and once again appreciated how good of an actor he can be. And with Pitt’s future (and excessively-long titled) films The Assassination of Jesse James by the Coward Robert Ford and The Curious Case of Benjamin Button coming out in 2007 and 2008 (in that order), chances are we’ll get to see more of Pitt’s talent (as opposed to “news” stories about him and his wife).

The title refers to the site acknowledged in the Hebrew Bible as Babylon; in Hebrew “babel” derives from the verb “balal” meaning ‘to confuse.’ Even with the religious history-inspired title, Babel does not reek with holy themes. The title allows modernists to get an extra hint from Iñárritu’s structure, intended to covey, similar to Clint Eastwood’s recent film Letters from Iwo Jima, how languages may be different, but the human struggle is universal. This is a humanist film, sympathetic and understanding. Languages, borders, and politics separate human beings, leading to the grand illusion that cultures are different, when in actuality we’re all the same. Babel is Iñárritu’s best work; it takes the mosaic construction of Altman-esque films to a new extreme, separates its characters by country, and then ties them together through bonds as complex, yet also as simple, as humanity and language.