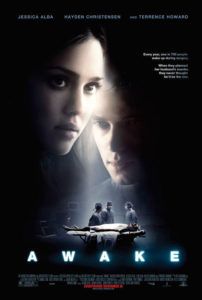 Awake reminded me of that episode of Alfred Hitchcock Presents called “Breakdown”, one of the few Hitch directed himself. In that episode, detached businessman Joseph Cotten finds himself completely paralyzed from a car accident. He can see and hear everything, and we hear his inner thoughts like narration. Everyone presumes he’s dead; the coroner gives him a look over, sees no signs of life, and pronounces him. Cotten shouts and tries to move, but nothing. Only when a single tear streams down his face does someone notice he is alive.

This movie’s gimmick is how “anesthetic awareness” helps the main character realize that his heart transplant surgery is part of a con to get his money, that he’s supposed to die, and there’s nothing he can do about it. Such consciousness rarely occurs in real life, but when it does, results are traumatic. But how does a movie keep the progress interesting? We can only watch an inert actor speak wind-tunnel narration for so long before we ask, What’s next?

Hayden Christensen plays Clay Beresford, a young Wall Street guru with heart problems. He’s on the verge of closing The Big Deal, but everyone’s more concerned about his health. You see, Clay has massive heart problems, which the film uses as a silly metaphor for a bad childhood. Meanwhile, his fiancée Sam (Jessica Alba) lays down pressure to set a date for the wedding; he’s afraid to even introduce her to his mother (Lena Olin), since Sam is his personal assistant. Clay meets with Dr. Jack Harper (Terrence Howard) to prepare for the upcoming surgery—who knows when that’ll be, however, as Clay is O-positive, and there’s no surplus on hearts. This is the same doctor that saved Clay from his original heart attack (and also the same doctor that admits he has four malpractice suits against him). Dr. Jack reminds Clay that time is limited. If he doesn’t get a heart, he dies; if he does get a heart, most transplant patients die within ten years. The doctor prescribes a sudden marriage, no matter the motherly consequences. For being such a savvy businessman, Clay doesn’t see the angle, somewhat inexplicably.

And so Clay and Sam are married. Just as they are about to consummate that marriage, Clay gets a call saying a matching heart is available. He’s rushed into surgery with Dr. Jack, prepped and put under. But wait, Clay thinks, why can I still hear, but more importantly feel everything these doctors are doing. And just as Clay is about to curse the eleventh-hour anesthesiologist (Christopher McDonald), he becomes more preoccupied with the searing pain, which is gruesomely depicted, of his chest cavity being pried open. Still, he remains calm, knowing it will be over soon. It’s when Dr. Jack starts talking about how “the plan” is progressing that Clay gets worried.

Most recently, What Lies Beneath tackled similar territory, with Michelle Pfeiffer’s character getting hit with coma-inducing drugs by her murderous husband Harrison Ford. To have to sit there and listen while those planning your murder do so without hindrances—certainly this is a topic for Hitchcock, or even Robert Zemeckis, but not Awake’s helmer Joby Harold, who muddles his concept by reducing it to an out-of-body experience. Harold avoids concocting clever ways of maintaining an interesting stationary main character, showing everyone else’s actions, but still keeping the movie about the protagonist. To extend such a concept would be a feat, requiring talent Harold doesn’t have.

This first-time writer-director takes Clay out of his body instead, has him walking around in his memories to uncover clues as to why Dr. Jack would want him dead. These scenes are dry and sadly reminiscent of The Invisible, a movie I could have gone the rest of my life without ever thinking about again. And just like that terrible movie, there’s a sympathetic villain: Dr. Jack regrets his plan because he’s come to like Clay. So why do this? Surely Clay’s money and the aforementioned lawsuits. But if he’s become desperate—why? We’re never told, thus the character is another missed opportunity to draw us in.

Is the plot device “anesthesia awareness” or an out-of-body spirituality? I do not know. There are scenes that show Clay in some sort of afterlife, walking about through time to get his answers. And yet, there are others where he remains restricted to his body, yelling for someone to notice his consciousness. Awake has its moments, almost exclusively during those initial operating room scenes. The rest seems tacked on, which is pathetic, considering it clocks-in at under 90-minutes. If you edited-out the fluff and scenes that don’t work, you’d be back to a 22-minute episode of Alfred Hitchcock Presents.