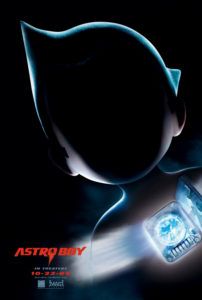 Astro Boy, from Imagi Animation Studios, uses modern computer animation to reformat the enduring Japanese pop-phenomenon for Western viewers. Originated in Osamu Tezuka’s 1952 manga, the character’s storyline was adapted into numerous anime television shows and films in the subsequent years. Hollywood filmmakers, among them Walt Disney, have sought to reformat the material for U.S. distribution, but until now the anime has remained an admired import. The new film makes a noble attempt to change its hemispheric appeal, but it won’t become an American cultural icon as it remains in Japan.

As the film closely follows the original storyline, there’s evidence that Tezuka’s manga took influence from Pinocchio and inspired later works like Steven Spielberg’s A.I. Artificial Intelligence. High above Earth floats Metro City, a floating metropolis where robots and humans coexist. The city’s top scientist, Dr. Tenma (voice of Nicolas Cage), loses his son in a freak accident and decides to rebuild a simulacrum. An indestructible machine, Toby (voice of Freddie Highmore) has jet rockets in his boots, blasters in his hands, x-ray vision, and all of the boy’s memories. He’s designed to avoid ever being harmed, thus saving Tenma from more despair. But when Tenma realizes the robot can’t replace his flesh and blood son, he discards it. The robo-boy ends up on Earth under the rule of Hamegg (voice of Nathan Lane), a loner scientist who takes in stray children. Hamegg turns out to be a slimy robot-gladiator promoter who forces Toby, now under the name Astro, to fight other robots in a futuristic Colosseum.

Heavy-handed characterizations do little to help the familiar plot, which sort of amalgamates both The Incredibles and The Iron Giant. Consider the villain, Metro City’s President Stone (voice of Donald Sutherland), a blatantly misogynistic war monger who’ll do anything to secure votes for his reelection. He’s a cliché wrapped in a stereotype. Stone wants to exploit infinite sources of energy, discovered by Dr. Elefun (voice of Bill Nighy), known as the positive Blue Core and the negative Red Core. Astro Boy is powered by the Blue Core, of course, whereas an out-of-control robot called “The Peacekeeper” uses the Red Core. The final act of the film involves Astro-turned-superhero battling the Peacekeeper, which absorbs everything from buildings to President Stone, becoming larger and evil and inspires more epic a battle for it.

There’s a worthwhile narrative in Astro Boy, even if it’s bogged down by moping disregarded children and unfunny robot comic relief. Kristen Bell voices Cora, a vaguely abandoned earthbound girl who Astro is afraid to tell about his robot-ness. Meanwhile, there’s a handful of wacky robots whose antics know no end, all voiced by celebrities like Eugene Levy and Matt Lucas—none of them amount to more than filler within the script. But there exist some thinly veiled social criticisms within the story, including a class struggle involving the futurist elitists on Metro City and the garbage-rummaging masses on Earth.

Americanized in its visual style, Imagi’s film cannot be called anime, rather it’s anime-inspired. Imagi made 2007’s TMNT, a highly disappointing effort that felt over stylized and under-written. Here the script is serviceable, but no more than that. The animated robot action is entertaining enough to divert the short attention spans of your children. Whether you enjoy it or not depends on your familiarity with the material. What it won’t do is convert you into a devoted follower, make your jaw drop from its bravado visuals, or inspire you with its cleverness. It doesn’t have that sense of magic about it. If you’re interested, however, the original anime programs are readily available on home video—best to start there and work your way downhill.