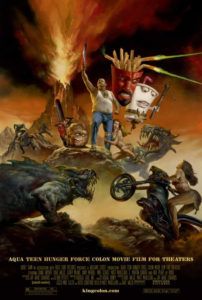 Though not on hallucinogens (unless chocolate-covered almonds count) during my screening of Aqua Teen Hunger Force Colon Movie Film for Theaters, in the first moments of the film, my phantasmagoria began. Concession stand nachos pound on drums while what looks to be a rotten green Dot sings, telling me I should run over my baby with my car if it cries during the movie… What should I expect? The writers of Cartoon Network’s Adult Swim cartoon “Aqua Teen Hunger Force”, now given free reign to expand their normally short episodes into a feature film, use this open forum to spout out one and a half hours of nonsensical plot lines without the hindrances of television censorship limitations. After all, the main characters are an anthropomorphized container of French fries (Frylock), a drink cup with straw (Master Shake), and a wad of meat (err… Meatwad)… How can I expect logic?

I never anticipated, however, that I would want illegal drugs during the screening. The type of audiences attending this film will likely be high as a kite; they have no chance of understanding the narrative otherwise. Even claiming that a story exists would be an intrepid statement. From what I gathered, there was something about an exercise machine called Insanoflex, which sings a song called “I like your booty but I’m not gay” and gets humped by a robot. We’re told origin stories for Frylock, Master Shake, and Meatwad, yet if you asked me, I couldn’t explain where they come from. I remember The Evil Dead’s Bruce Campbell doing the voice for a giant chicken nugget. Carl almost beds a female body builder but gets his muscles stolen by Dr. Weird from South Jersey Shore. In every other scene, Dr. Weird tears his skin off. Master Shake makes a reference to David Cronenberg and Videodrome (you know, since Frylock has a VCR in his head). And Meatwad gets shot in the face with a shotgun.

Don’t worry. I haven’t spoiled anything for you. I’m of the firm belief that if I described this movie scene for scene, I still wouldn’t reveal anything (and it has nothing to do with my descriptive capabilities). You could take a ten-minute cat-nap during the screening, wake up, and still know as much as you did when you fell asleep. In fact, I attempted to get a wink or two of shuteye, but just as my eyelids were getting heavy, I was startled back to consciousness by a talking slice of watermelon.

Postmodern filmmaking at its most random, Aqua Teen Hunger Force Colon Movie Film for Theaters (which is too long a title even if abbreviated: ATHFCMFFT) proves characters and story aren’t the driving force of cinema. Something I’ve said for a long time: movies rely solely on teddy bears with blades that saw off your hands. I’m a fan of the Adult Swim show, as it exists in an easy-to-swallow, 15-minute per episode capsule. More random than other adult animated cartoons such as South Park or The Simpsons, the show offers shorts bursts of crazy that come off like a dirty joke. As a feature, it’s like you’re being told a dirty joke that lasts for 86 minutes. And though I laughed, sometimes uproariously, the lulls in between dragged with a surprising level of unfunny. I don’t really know to whom this film caters (if anyone but drugged-up teenagers looking for wacky randomness to accentuate their high). Too many gags relied on pre-established material from the show, so even if you’re a fan of the series, you may feel disappointed, even a little cheated by joke recycling. If you’ve never seen the show, I can all but guarantee you won’t enjoy the film, as too many random moments will bewilder unfamiliar audiences. I left the theater somewhat uncomfortable, like I’d been violated; but on the bright side, I laughed a little.