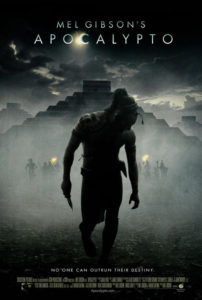 What if Mussolini was actually the writer and director of It’s a Wonderful Life? Would American audiences have drooled over that charming film for the last sixty years? If that were a reality, I imagine critics and film historians could find Italian Fascist symbols everywhere: Remember the scene when George Bailey makes his speech in the bank that explains where the townspeople’s money went, a critic might say. That scene perfectly describes the criminality of “laisser-faire” economics, an early characteristic critique of Italian Fascists. Mussolini’s It’s a Wonderful Life would be shunned as a clever piece of propaganda and I certainly wouldn’t be watching it this Christmas season. But Mussolini didn’t direct It’s a Wonderful Life, and as far as I can tell there are no Fascist undertones present. Mel Gibson did direct Apocalypto, however, so I found oodles of Christian symbolism is throughout.

The film follows Jaguar Paw, a Mayan who lives in a small village in the forest. A group of slave collectors plunders his village, raping, slaughtering, and then imprisoning the bulk of its population. Jaguar Paw loses his father and is forced to leave behind his very pregnant wife and small child in the only hiding place he could find for them: the bottom of a large well. The slave collectors take Jaguar Paw to the Mayan city where he is to be sacrificed to the gods. On the way, a girl carrying a “plague” prophesies that a man named “Jaguar” will lead the Mayan peoples to their end. But Jaguar Paw only thinks of his wife and child, and how he must find a way to escape so he can rescue his family.

Apocalypto is a sweeping, engaging, and incredibly violent film that will certainly not bore audiences. It’s well over two hours long but streams by at a whirlwind pace. The only problem is how to review it… Do I look at it from a subjective or objective point of view—do I critique only the metonyms, or do I look at the whole metaphor? If I were to concentrate solely on the film, disregarding Mel Gibson’s presence as the co-writer, producer, and director, I would say Apocalypto’s interpretation of the Mayan civilization is breathtaking, if not inaccurate. Scenes within the Mayan cities provoke a grand sense of awe. Massive undulating crowds of people cheer and chanting; elaborately decorated men make gory ritual sacrifices atop a bloodied temple. After cutting out the heart from a sacrificial body, the head is lopped off and thrown down the temple stairs, then rolls hundreds of feet downward, spinning and splattering blood everywhere. The people below applaud and gather to catch it.

Harbored are some of the most impressive visual elements of any picture this year. The costumes, set direction, and art direction all make for an impressive presentation. The only unnatural aspect was the director’s choice of a digital camera; for a film with Apocalypto’s visual possibility, I felt digital was the wrong choice. Digital requires less equipment, fewer filming and editing costs, and speeds up the process of filming exponentially. In concept and in budgetary terms it’s the right choice. But during some of the more intense chase scenes, the already unpolished looking digital photography turns into a static mess. Apocalypto deserved more attention, visually. It has the potential scope of a Kurosawa, Lean, or Spielberg film, but the grainy digital camerawork prevented it from making that leap.

Even with the digital photography, Gibson’s picture maintains a horrific majesty and wonderment unique to cinema. The plot isn’t original, but the setting of the Mayan culture inspires the lacking state of imaginative, exciting filmmaking. I praise Apocalypto only because, without the awareness of Gibson’s presence behind the camera, that’s how I would review it. Knowing his name is there, and considering his very public religious views, I couldn’t help but look for Christian imagery. And, unfortunately, I found a lot of it.

Strangely, the Mayans refer to “Hell” several times… Lines like “I’ll see you in hell!” are frequent. But I’m pretty sure the Mayans didn’t believe in “Heaven” and “Hell”—that is, not the Christian ideal of it. The Mayans believed in Xibalba, ruled by Camazotz (a giant blood-eating bat god). Xibalba is mentioned in the film, but not used as significantly or as frequently as “Hell”. (Frankly, I’d be less apt to swear and behave immorally if I thought the punishment was eternity with a blood-sucking bat creature that was going to claw my head off. In comparison to Camazotz, Satan is a pussy. Satan’s weapon, a trident, is such a feared tool for punishing sins that they named a chewing gum after it.). In general, Gibson’s dialogue lacked the appropriate eloquence for the epic story. At one point, the leader of the slave captors dodges a falling tree. He announces, “I am walking here!” Apparently, the Mayan people have seen Midnight Cowboy and really like Dustin Hoffman’s performance… Why the Xibalba would a person making a movie about the decline of the Mayan civilization feel the need to include late 1960’s pop culture? It was an awkward line and felt like it should have been in another movie (something on par with Scary Movie 4).

Another religious signifier in the film is a wound on one of the Mayan villagers-turned-captive. Its placement resembles Christ’s wound caused by the Lance of Longinus during the crucifixion (otherwise known as the Spear of Destiny, which sounds a lot cooler than it really is). The Mayan on which the wound resides ends up being sacrificed so others can survive… Get it? Like Jesus! Rather than spending time on the details of the Mayan religion, which could have added a needed intellectual element, Gibson sublimates with Christian symbolism. Directors who embrace Christian imagery often use it as a type of ironic iconography (For example, when one of his major characters dies, Martin Scorsese often uses a bird’s eye view showing the body’s position analogously to Christ’s corporeal position on the cross. The most recent example of this is during Jack Nicholson’s death scene in Scorsese’s The Departed. Scorsese admits it’s unintentional, but nonetheless realizes the association’s impact.), but Gibson’s history with religion is too potent to disregard this imagery as coincidence.

Gibson’s persona as a man of both suspicious religious views and near-obsessional concentration with the treatment violent realism (and the linking between those two characteristics) makes every scene in Apocalypto raise an eyebrow. I was about to write that Gibson is no Mussolini, but there something strange going on under that crazy smile of his. Maybe it’s because I’m of the polarized half that thought The Passion of the Christ was subtly anti-Semitic. Maybe it’s the fact that his father denounced the Holocaust’s existence. Maybe it’s his recent drunken rant about Jews. But any weird little behavioral hints alluding to a greater problem for Apocalypto’s director, or the director of any film, especially problems relating to anti-Semitism or extremist sects of Christianity, only damage the film’s appeal for me.

The very idea of “Mel Gibson” attached to this motion picture makes me mistrust it. With him comes a mass of contradictions I’ve only begun to penetrate in this review. Taking Gibson into account, the viewer must acknowledge the Christian iconography present in the film. Place the Mel Gibson and his Christian symbolism to the side, and Apocalypto offers a visual feast on par with his own Braveheart. Major historical inaccuracies aside—again, like Braveheart—and if you can dislodge “Mel” from your head for the duration of the film, Apocalypto is as thrilling a movie as 2006 will bring.