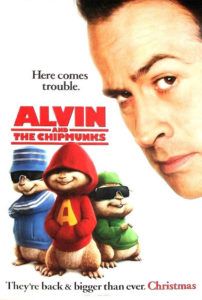 When critiquing a children’s movie, I take an alternative approach to my normal routine. Rather than writing a movie review solely on my own observations, I’ll attend a mid-day screening, when the theater is packed with flustered parents and their hyper kids, and work in part from their reactions. The restless audience for Alvin and the Chipmunks tells me this movie, which was miserable for me, was also miserable for 5-to-10 year-olds. In addition to infrequent laughter, the children’s attention wavered. One boy a few rows up used the guard rail as a jungle gym, swinging like a monkey instead of enduring the movie. I wish I could have done the same without gathering odd glances. Another child was more interested in sucking every last drop from his soda, which echoed a loud, gruff slurping sound no one seemed distracted by. I suppose the children’s behavior could be a result of Attention Deficit Disorder or sugar-highs ensuing from movie candy, but it’s doubtful.

Back in September, I suggested that the release of this film would mark the End of Days. I was taken aback by the hip-hop modernization of the cartoon rodents from my childhood. My fear was that a subliminal message was embedded into the trendy new look sported by the Chipmunks in early advertising. Granted, my suppositions were an exaggeration of my disgust with the phoniness of this film’s marketing, but still, I am happy to report that the Apocalypse has not come.

The group ‘Alvin and the Chipmunks’ have released something like 10 albums of high-pitched singing since their debut almost fifty years ago. I can only hope this movie doesn’t inspire more—do we really need more shrill singing? Introducing new generations to the pop music trio originated in the 1950s by Ross Bagdasarian, and then again in the 1980s with the Ruby-Spears cartoon, Alvin and the Chipmunks offers computer-generated rodents which are admittedly cute, even with their chirpy, helium voices. Alvin (voiced by Justin Long), Simon (Matthew Gray Gubler), and Theodore (Jesse McCartney) live in a tree farm, where somehow they are exposed to pop culture enough to know the lyrics to “Bad Day” by Daniel Powter. Their tree is cut down and placed in the lobby of Jet Records, where they eventually run into Dave Seville (Jason Lee), who adopts them and turns them into pop stars.

After striking their record deal with Ian (David Cross), a money grubbing executive type, they leave Dave to pursue their careers. You see, they just want to be part of a family, but Dave has trouble making commitments. “Uncle Ian” doesn’t, not when it means endless worldwide hits like “The Chipmunk Song (Christmas Don’t Be Late)” and “Witch Doctor”. Both the Chipmunks and Dave realize the mistake they’ve made separating, except by then it’s too late. Ian doesn’t want to give them up, and so Dave has to take matters into his own hands.

The only thing more cartoonish and silly than singing CGI vermin is Jason Lee, who seems intent to over-emphasize every syllabic annunciation and gesture. His performance was like watching an animatronic performer at Circus, Circus: awkward and sometimes frightening. Whenever he announced the line “Alvin… Alvin!… ALVIN!” I cringed from its rigid and stale delivery. Furthermore, the movie relies on that tagline more than it should, given Lee’s poor recitation of it.

I am sad to report this is the second movie in 2007 that has reminded me of the brief satirical character Poochie, which appeared on The Simpsons. The other title was Underdog, another movie with Jason Lee and CGI animals. If you recall, Poochie was an addition to “The Itchy and Scratchy Show”, one Bart and the intelligent Lisa saw as a blatant attempt to freshen up a cartoon that had reached a plateau. Poochie the dog contrasted the cat and mouse team of Itchy and Scratchy; he rapped, traveled by skateboard, and wore cool shades. The Simpsons’ children saw right through Poochie’s transparent attempt to revive the series; he appeared in only one “Itchy and Scratchy” episode, and then was written out. Everyone on The Simpsons learned their lesson and Poochie was never discussed again. I can only hope children will find Alvin and the Chipmunks just as transparent.