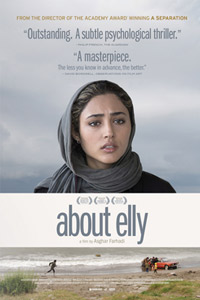 Asghar Farhadi asks questions about our capacity for deception in About Elly, his 2009 feature about a woman who goes missing on a short vacation outside of Tehran. If that setup rings a bell, the Iranian filmmaker has channeled Michelangelo Antonioni’s L’Avventura from 1960. Both films feature characters who lie out of self-preservation, whether it’s to avoid an embarrassing truth, protect their own ego, or acknowledge just how badly their dishonesty has snowballed. But where Antonioni sought to explore contemporary discontentment through his slow-cinema aesthetic, Farhadi’s film crackles with theatrical flair, delivering a chamber drama shot with a kinetic use of space and intimate camerawork. Similar to Farhadi’s other films, About Elly also features a sly critique of Iranian society in his portrait of class division and religious devotion; it explores how factors stemming from the Islamic faith perpetuate the situation. Ultimately, the film argues that “a bitter ending is better than endless bitterness”—an elegantly worded call for the truth no matter how ugly.

Before Farhadi’s screenplay—conceived with Azad Jafarian—drops the viewer into a morality play, he outlines a group of thirtysomething, middle-class couples, and their children. When their lodging arrangements in a beachside community fall through, they must move into a dilapidated villa by the Caspian Sea. Grumbles aside, the dusty accommodations do not dampen the mood. Everyone’s in good spirits, singing, clapping, and enjoying the company of longtime friends—all except the quiet schoolteacher, Elly (Taraneh Alidoosti), an outsider invited by a young mother, Sepideh (Golshifteh Farahani), as a match for their friend Ahmad (Shahab Hosseini). The men remark that Elly looks “healthy” and “nice and friendly,” even though she’s part of a servant class. Ahmad, a divorced man who has recently returned from abroad in Germany, likes her. The others tease him with remarks like, “Congratulations to the bride and groom!” Elly overhears these little jokes, and they embarrass her. She acts nervous, saying she wants to return to Tehran the next day to visit her sick mother. As we come to find out, both she and Sepideh have secrets they’re not sharing with the others.

Farhadi has a way of gradually building to small, seemingly inconsequential tensions until they reach a point of no return. In his 2011 breakthrough, A Separation, this point arrives when a woman is pushed, allegedly leading to a miscarriage. In About Elly, the breaking point comes as one of the mothers leaves Elly in charge of the children. All at once, a young boy nearly drowns and, as the couples scramble to revive him, they realize Elly has gone missing. Has she gone into the sea? They call for help, but the rescue party gives up looking after an hour, explaining that her body will wash up on shore sooner or later. Then again, there’s some doubt about whether Elly went into the sea or went home. After all, they don’t know her all that well. Sepideh’s husband, Amir (Mani Haghighi), lashes out at his wife: Sepideh doesn’t even know Elly’s last name, so why would she invite a stranger on the trip? Why is she always sticking her nose in other people’s lives, trying to play matchmaker? Amir even beats Sepideh to get the truth, complaining, “She got me to raise a hand to her” and deflecting the blame. 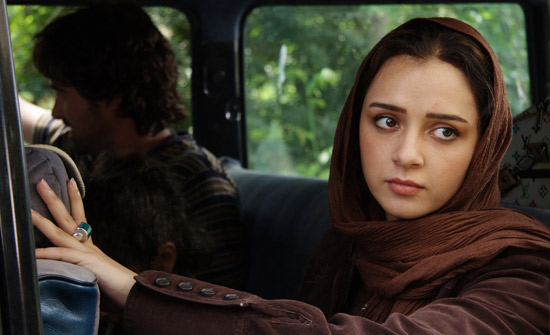 All the while, Farhadi’s screenplay cleverly depicts the mental gymnastics required to pass the buck, divert responsibility, and continuously hide the truth. Exploring the idea that Elly may have left, they wonder, “What did we say to offend her?” The friends, composed of the secular bourgeoisie, remain oblivious. They’re likable until their veneer rubs away and reveals the selfish people underneath. Until their self-righteousness exposes something meaner, they are almost dopey. When the group learns more about the secrets kept between Elly and Sepideh—and it becomes more likely that Elly is dead—each character finds ways to make the truth more palatable with lies. “We didn’t know,” they claim. But even after they find out the truth, they negotiate to keep their story straight to avoid culpability. They even try to justify their actions by describing them as fate. One of them suggests that something Elly said during a game of charades implies “it was written”—thus freeing them of any personal responsibility. And then there’s the point when someone has the nerve to complain, “Some weekend!”

Indeed, Farhadi peels back layer after layer of the story to heighten the dramatic stakes, gradually revealing his cultural commentary. Somehow, these yuppie characters have established themselves as the victims, whereas Elly ends up in a body bag. Watching About Elly, I kept thinking about those yuppies-in-peril thrillers from the 1990s, where a few well-meaning but clueless types find themselves faced with the ramifications of their reckless behavior. But Farhadi’s formal skill far outshines the likes of Adrian Lynne (Fatal Attraction, Indecent Proposal) and Barbet Schroeder (Single White Female, Before and After). He and cinematographer Hossein Jafarian put the camera in the middle of the brilliant ensemble, submerging the viewer in a claustrophobic situation. Only the frantic near-drowning sequence makes the viewer feel greater shortness of breath. The overlapping dialogue moves fast, in a way that subtitles cannot possibly capture, but we get a sense of its anger and panic through the performances. Elsewhere, Farhadi is more expressive, if not precious about Elly’s disappearance, employing jump cuts as she flies a kite on the beach—it’s the sole moment whose stylistic flourishes do not fit.

About Elly debuted in Iran in 2009, and for the next year, it traveled on the festival circuit, winning awards and earning nominations for Best Film, Best Actress, and Best Screenplay. The film did not receive an official release in the United States until 2015; it took Farhadi to win an Oscar before a studio gave it distribution. Given its timing, it’s tempting to watch the film through the lens of A Separation and draw comparisons. Both films entail heated disputes about marriage, moral choices, religious motivations, and personal responsibility that extend across class and gender lines. Both films prove emotionally exhausting in their use of a tragic, unintended death as a dramatic lynchpin. Both have a similar execution in that Farhadi’s story structure and visual presentation draw inspiration from his roots in theater. But where A Separation leaves its questions open, prompting introspection and discussion afterward, this earlier film supplies some measure of closure, which is arguably less engaging. Nevertheless, About Elly contains Farhadi’s signature dissection of human nature, leaving the viewer in a prolonged state of introspection as only his melodramas can.