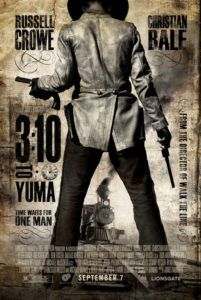 Westerns peaked during The Golden Age of cinema when archetypes of good and evil seemed engrained into the culture. Now, such genre pictures are said to be out of date, primarily, I think, because morality plays seem transparent to modern audiences. Revisionist Westerns like Clint Eastwood’s superb The Unforgiven suggest that previous notions of hero vs. villain should remain ambiguous since history has taught us such concepts are often false. I remember reading a book about bogus myths of the Old West that suggested heroes like Wyatt Earp were just as criminal and selfish as the criminals they put away. As John Ford suggests in The Man Who Shot Liberty Valance, if the legend becomes fact, print the legend. 3:10 to Yuma is a remake of Delmer Daves’ 1957 film starring Glen Ford and Van Heflin (a somewhat idealistic Western perhaps too close to High Noon). But don’t hold the normally contemptible title of “remake” against it. Unlike the source film, director James Mangold employs narrative tropes of yesterday’s Western but plays with them enough so that it can neither be called traditionalist nor revisionist.

Christian Bale plays Arizona rancher Dan Evans, an unfortunate man whose life has never given him much luck. During the Civil War he lost his leg, which left him incapable of properly defending his family when, as he is unable to pay on his land, his barn is burned to the ground by an intolerant creditor. His wife Alice (Gretchen Mol) doesn’t seem to respect him, his youngest has tuberculosis, and his elder 14-year-old son holds no restraint in telling his father that he’s a cowardly, incapable man. Life seems to have given up on Evans. Pushing the family cattle, Evans and his boys witness a coach robbery by Ben Wade (Russell Crowe) and his gang. Wade is a pensive villain, one from whom we see sensitivity emerge, but also intense cruelty. Crowe plays him like a teddy bear with razor blades embedded just under the surface. He sketches pictures in his diary and has romantic ideals, but if squeezed, he’ll lash out.

After Wade is captured, a Chicago Pinkerton agent named Butterfield (Dallas Roberts) offers to pay Evans $200, which will keep the farm afloat, if he helps take Wade to the train. The escort includes Butterfield and one of his men, Evan, bounty hunter Byron McElroy (Peter Fonda, in a great but small performance), and the prototypical Western-doctor-type Doc Potter (Alan Tudyk). Meanwhile, Wade’s gang stalks their trail, led by Wade’s right-hand man, Charlie Prince (Ben Foster). Foster excels at playing intense characters, such as his raged part in Alpha Dog. Here, Foster’s Prince might be in love with Wade. He seems to adore his boss, leading the gang through rough territory and murderous gun battles to save him. Prince’s love remains wholly unspoken, but by no means unreadable—we can see it in his eyes, particularly after he burns a man alive to get Wade’s hat back. Part of the performance relies on being a lapdog for the leader; there’s servant devotion there, but also a profound and undeclared joy in pleasing his master, no matter the bloodshed.

Evans’ teenage son William (Logan Lerman) trails behind, following Wade’s escort in secret, desperate to outshine his disappointing father and understand the confusing-yet-appealing criminal life of Ben Wade. How can someone as smart and charismatic as Wade be bad, William wonders. Compared to his father, Wade seems heroic and reactive, a man willing to act on what he believes in, even if that belief resides in money by death. Dan Evans seeks only to make his family proud, to live his life and provide for his family. And perhaps Wade envies the simplicity of Evans’ life, his drive to remain the Roman ideal of the paterfamilias. After a series of thrilling interludes on their way to Contention, Wade and Evans find themselves locked in a hotel room together waiting for the train. Wade’s gang sits just outside, with Prince amassing the townspeople to kill Evans or anyone that helps him, offering $200 per head. Hero and villain are skewed, or at least pondered-over in these scenes. The Western usually questions what makes a hero or villain, often using the law as its great equalizer. The train replaces the law as the only absolute in this film.

James Mangold, director of Walk the Line and Cop Land, has a meandering filmography filled with varying genres—everything from romantic comedy to horror. His work on this Western proves he has capable hands, and I look forward to his next film. Mangold’s work would be average without his two stars, however. Bale and Crowe are two of the best contemporary actors; Mangold does wonders in getting behind their talents. Exchanges where they contemplate each other are breathtaking, but wouldn’t be had the dialogue been spoken by other actors. Both have conflicting undertones, ones we cannot fully understand until the final, impressive shootout with which 3:10 to Yuma excites and shocks us. I loved this movie, and hope Hollywood sees the potential of more Westerns with its success. The 1957 script by frequent Western writer Halsted Welles was based on the short story by crime novelist Elmore Leonard (Out of Sight, Get Shorty), originally published in 1953 in Dime Western Magazine. Rewriting the original, though Derek Haas and Michael Brandt may not have the resumes to prove it (their previous work includes 2 Fast 2 Furious and Catch That Kid), their understanding of the genre is insightful, worthy enough for me to believe there’s still hope yet for the Western for contemporary audiences. After this picture, the Western is getting up off its deathbed with a slight cough and disorientation, but going strong.