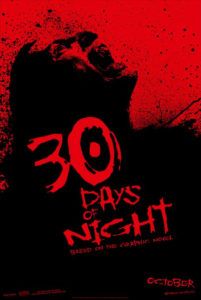 Tired vampire clichés seem to draw from the Victorian era or earlier, from where bloodthirsty immortals derive their seductive, strangely well-mannered, and extremely sexual behavior. Author Anne Rice gives vampires class and distinction as if they’re the uppermost of the upper classes who feed on us déclassé mortals. She’s made vamps appealing, so much so that her characters can’t be blamed for wanting to become vampires. Such classy vamps have been played by Gary Oldman, Brad Pitt, and Tom Cruise; then again, there’s also been Stuart Townsend, Stephen Dorff, and Kate Beckinsale, who all make vampirism look like the stuff of disturbed teens taking themselves entirely too serious.

30 Days of Night doesn’t pretend there’s any class in tearing open the neck of an unsuspecting victim and sucking down a quart or two of blood. Its vampires are like a pack of wild dogs who happen upon a carcass of fresh roadkill. They aren’t sexualized creatures that seduce their victims and then prey on them; they’re animals, hunting and slaughtering kill like it’s us or them. They’ve traveled hundreds of miles to Barrow, Alaska because there the sun is about to set for a month; to a vampire, that signals a month without fear of obliteration-by-sunlight.

Barrow is the northernmost point in North America, so its inhabitants are used to isolation. When winter comes, about eighty percent of the population flies south until the sun becomes regularly visible again. Remaining are just over one hundred people in the town. Every precaution is taken to ensure the lasting sanity of those staying behind in the darkness. Liquor is illegal, food stockpiles are carted in, and everyone’s generator is ready as backup.

Josh Hartnett plays Barrow’s sheriff, Eben Oleson. He discovers a number of odd occurrences just as the sun sets for winter: dozens of cell phones burned, helicopter parts smashed, and sled dogs murdered. His estranged wife, Stella (Melissa George), should be leaving town on the last plane, but misses it and is trapped there. After the sun goes down, Barrow seems to close up. No one wants to stay, so not even the airport stays open. It’s a skeleton crew, with a few brave souls left behind.

Enter Ben Foster’s character, billed only as “The Stranger.” He’s the equivalent of Dracula’s Renfield, a human slave doing the bidding of his master in hopes of becoming a vampire himself. Foster gives The Stranger a deep Creole accent he draws out and makes sinister; it a performance that with little background does much to get under our skin. This is the actor’s second such performance this year, after his sadistic Charlie Prince in 3:10 to Yuma.

Sheriff Eben believes The Stranger is behind these random acts of vandalism, but soon realizes they’ve been cut off for a greater cause. The Stranger creepily announces, “That cold ain’t the weather, that’s death approaching.” All at once, hell breaks loose in Barrow as a gang of vampires begins attacking. At first, survivors just think they’re killers, leading to the obligatory “there’s no such thing as vampires” conversation. In moments, the group of faster-than-sight vamps chomps its way through town, leaving a few survivors here and there.

Sheriff Eben, Melissa, and some others hole up in an attic. In these close-quarters scenes, Hartnett provides a capable male lead; his character isn’t multifaceted, but he’s at least human, and as we’ve seen in his previous work, Hartnett does human well enough. The survivors aren’t do-it-yourself superheroes like Blade, with a sudden and unstoppable ability to endure and kill. In fact, they’re scared as hell. They know they’re trapped, with over eighty miles of blizzard terrain between Barrow and the next town. And even though we don’t get to know many of them in great detail, they’re well-enough developed that we’d prefer they not die.

Unfortunately, the vamp creatures are one of the least interesting aspects of the film. They’re an ugly group of bad guys, jumping from building to building, deadly and unstoppable. Refurbished with needle-like teeth, odd skeletal structure, long fingernails, loud screeching hunting calls, and black eyes, these vamps dress snazzy with long trench coats and fresh haircuts. They’re a group more akin to Robert Rodriquez’s bloodsuckers in From Dust Till Dawn (creaturelike; savage; without sensibility) combined with those from Underworld (secret society members; elitists). They talk in garbled tongue, translated through subtitles; the language is a little silly, but it’s heard so rarely that it scarcely distracts. And they slaughter bodies when killing—Danny Huston (Children of Men, The Proposition) is the vampire leader who isn’t interested in expanding his gang. He makes sure they remove the heads of their victims.

I suppose it’s possible that Huston and the rest of his vamps have a mansion somewhere in England or France where they engage in Anne Rice-type bloodsucking pursuits, all civilized and proper with not a drop spilled. Here, however, their trip to Barrow is like an old-timer’s getaway to Mazatlan, Mexico, with Alaskan citizens being the vamps’ all-you-can-eat shrimp buffet. They’re so ravenous they don’t even bother to wipe their chins; each of them has a blood mustache and a spattered face.

Carnage ensues in the streets, and director David Slade catches it with an aerial bird’s-eye view. We see people scattering, vampires hunching over bodies and shaking/chewing them violently, gunshots fired, and people desperately looking for shelter. Slade’s camera shoots the action with beautiful clarity, giving this grim, bloody horror picture the photography of something more Hitchcockian. And it is bloody, shockingly so for a movie that looks this good. Slade also directed the 2005 suspense thriller Hard Candy, an impressive little picture that was filmed well enough to intrigue me when I heard he was making a vampire movie.

30 Days of Night is based on Steven Niles’ three-issue comic book miniseries; Niles also co-wrote this screenplay. The story’s greatest benefit is its basic scheme, a setup that has had me unnerved since first reading about it. Isolation and terror help flesh-out a new vampire mythology, this one more conceptually scary than other recent attempts to revive the genre. The film’s execution is gory and graphic like a B-movie, perfect for devout horror fans, while the production is A-list, giving the rest of us something to cling to.