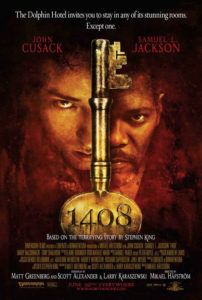 Stephen King adaptations, especially bad ones, are a dime a dozen. As long as he keeps writing, we’ll be afflicted with silly King interpretations. But for every poorly suited Dreamcatcher, Cujo, or TV-movie like The Stand (the list could go on for paragraphs), King finds himself well-tailored into The Shawshank Redemption, The Green Mile, Carrie, Misery, or The Dead Zone. King achieved blockbuster status with his literary fiction, making him into a household name—though something about his work lacks cinematic quality. Whenever a film takes King’s stories verbatim, they fail; whenever a talented writer such as Frank Darabont or Stanley Kubrick sweetens King’s material for audiences, it becomes an artistic success. Which explains why The Shining, though considered shamefully unfaithful, is perhaps the best King adaptation of all time.

King’s work has a dreamy quality; when his heroes, barely surviving his story’s horrors, break into a dialogue about God or slip into three chapters of flashbacks, we realize King doesn’t write for film, he writes novels. Even his screenplay efforts (Creepshow, Pet Cemetary) lack cinematic consistency. He needs another writer, distant from the material and concerned with filmic vision, to reinvent his basic strength for storytelling, as opposed to his oft-oblique vision as a novelist. But uncinematic writing isn’t the problem with 1408‘s poor adaptation. The hokey horror movie ending is…

As they often are, the hero of King’s new short story-to-film adaptation is also a novelist. John Cusack plays Mike Enslin, a cynical former fiction author turned dime-store non-fiction writer, who examines ghost stories from haunted homes and hotels around the world. His travels find him staying overnight in spooky rooms that proprietors hope Enslin will write about in his next book—except he’s used to their tricks. Most business owners spin their respective tales of poltergeists to reel folks in and occupy a few more rooms. But Enslin has never seen a ghost; he remains an adamant nonbeliever.

Why Enslin writes about something over and over again that he has no belief in remains unexplained throughout the film. For a devout atheist, ghost hunting seems an unlikely occupation. Perhaps it is the objectivity of writing about something he knows or believes he knows, is a falsity. Whereas writing about something meaningful, such as his father (the subject of his first and only fiction novel) or recently departed daughter, would require too much emotional effort—something Enslin is clearly opposed to. The story gets moving when he receives a postcard from the Dolphin Hotel in New York City telling him “Don’t enter 1408.” Enslin adds up 1-4-0 and 8, realizes it’s 13 and waves the postcard off as another publicity stunt invented by a clever hotel manager. However, his career thrives on debunking such ghostly myths, so he attempts to check in and finds that the entire staff refuses to admit him. So who sent the postcard? We never actually find out.

After waxing legal on the manager, Mr. Olin (Samuel L. Jackson), Enslin finds himself in Olin’s office, where the film’s best scene takes place. Jackson’s character dissuades Cusack’s from entering room 1408, explaining that 56 people have died in that room. More than half of those were suicides and murders, but many were “natural” deaths that Olin believes to be more than coincidences. Olin tells of a man that slit his throat and then tried to sew it back up again. Happily, we aren’t shown such awful imagery; after seeing Olin’s archive photos, we use our imaginations (arguably more affecting). Olin doesn’t claim the hotel has an angry spirit or that 1408 acts as a passageway to hell or anything, but he does say the room is evil. He might as well have said that some buildings, like people, have a shine. Jackson’s role is limited to only a few brief moments outside this initial office scene, which itself is only five or six minutes long. One might wonder why such name talent would have agreed to take this part? Likely because Olin’s brief appearance sets up an entire film.

As expected, when Enslin enters the room, a well-paced build accelerates mild shocks into outright terror within moments, recalling the masterful pace of Kubrick’s The Shinning. Much of 1408 will strike viewers as derivative, and it should, but during the first hour, the scares are genuine. In addition to strange sounds coming from the room, transparent apparitions of the former guests appear, and an iconic song—a typical Stephen King device—sets the creepy tone. Every one of Christine’s songs alluded to the car’s suspected emotions; almost personifying the car was Thorogood’s “Bad to the Bone”, which illustrated the vehicle’s own pun-full death drive. Stand by Me’s soundtrack recalled the same nostalgia felt by the picture’s narrator. 1408, on the other hand, replays The Carpenters’ “We’ve Only Just Begun” as an eerie forewarning of the room’s sinister intentions.

For the first hour, I was clenching the arm of my chair, primarily because Cusack consigns himself to wonderfully believable reactions of fear—in a room alone, unable to escape, trying to convince himself he’s not afraid and that it’s all some stunt pulled by Olin. We understand why there were so many suicides in this room; it seems to be driving Enslin to insanity (again, think of The Shinning). I kept thinking to myself how well directed the film was, how sound many of the camera angles were. And yet there’s a point, after about an hour in, where it takes a turn. Relying on today’s twist-heavy finale’s to tell its story, 1408 resorts to several cliché moments, attempting to shock us with a revelation on-par with the silliness of “It was all a dream.” But wait, was it just a dream? Was it? …Well, was it?

Rather than just playing out what could have been an unsettling conclusion (Enslin killing himself like the rest of the room’s victims), we get an ending that feels abrupt and out of character for a movie whose thrills rely on claustrophobic fright. 1408 has merit. It abstains from elevators full of blood and gore-for-gore’s-sake horror, which is a change as of late. Regrettably, this is two-thirds classic ghost story and one-third post-The Sixth Sense twist-happy absurdity (in that order). When the latter portion is the last thing on the viewer’s mind, it spoils everything good that came before it.