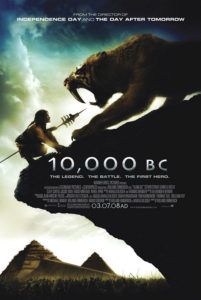 10,000 B.C. promises attractive computerized special effects set in the land that time forgot, meaning it’s somewhere between Ice Age and Raquel Welch’s 1966 skimpy loincloth vehicle One Million Years B.C. The film lives up to the “land that time forgot” part anyway, existing in a world even those who flunked history class know never happened. If you saw Mel Gibson’s entertaining Mayan adventure Apocalypto, you’ve seen this movie, as both follow virtually the same plotline. When people from a small mammoth-hunting village are taken by “four-legged demons” (men on horseback) to the first bastion of civilization, brave hunter D’Leh (Steven Straight) must rescue his people. Mentored by village elder Tic’Tic (Cliff Curtis, in a role far beneath his established talent), D’Leh fulfills his peoples’ prophecy and becomes their savior, rescuing his blue-eyed destined-to-be lover Evolet (Camilla Belle) from the evil god-king of civilization.

Traveling from their mountainous abode across plains and through absurd bamboo-ridden jungles, our hero-tribe gathers followers until they arrive at the ziggurat temple (known for their Iran/Iraq, middle Mesopotamian locales), which in the film is curiously built nearby an Egyptian-style pyramid. (Note: At this point, if you ignore the historical and geographical inaccuracies, you might make it to the end credits.) Taming the savages is a god-king, straight from 300 (indeed, even the finale compares to 300, complete with a spear to disprove the sworn god-king’s power), who intends to sacrifice Evolet and further assert his god-kingliness.

Our sympathetic heroes speak English, while everyone else speaks (what I assume to be) languages based on Ur-speak, the first language. Their syntax resonates a mere working knowledge of English; Emmerich chose to keep our heroes familiar, writing them in our own tongue to better appeal to his target audience (Does he mean to suggest that any movie with subtitles is automatically less engaging?). As a result, the small hero tribe speaks English, while everyone else communicates in foreign lingoes; since ninety percent of the dialogue requires us to read subtitles anyway, why not just consign completely for the sake of historical accuracy? It’s a shy piece of English exceptionalism, one Mel Gibson’s Apocalypto avoided and was a better movie for it.

But that’s nothing compared to how clean-cut D’Leh remains. Straight’s nicely trimmed beard, fresh dreadlocks, and perfectly white teeth attest to his wonderful pre-history grooming skills. His tribe must’ve conquered the time-immemorial art of dentistry, as his teeth sparkle with a ridiculous Crest glow. Perhaps Emmerich thought his target audience would balk at poor dental care, whereas I think most audiences will jealously resent D’Leh for his superb dental shine.

Even with the theatrical trailer’s promise of saber-toothed tigers and wowing mammoth-hunting excursions, none such computer-generated beasties inspire awe. Limited to merely sniffing about our hero peacefully, we keep hoping the saber-toothed tiger’s massive fangs will dig into someone, anyone, and soon. Alas, no such luck—it’s a nonviolent saber-toothed tiger, despite its roars. Instead, the film’s most dangerous creatures are giant ostrich-like birds that hunt in organized packs; as with his Godzilla dud, Emmerich uses velociraptor-equivalents that jump and screech in ways all too familiar for us Jurassic Park fans. And the mammoths are ostensibly big cows, doing little more than running in frenzied herds. All of these prehistorical monsters are conceived with bland computer effects reminiscent of shoddy video game graphics.

Emmerich purveys big, dumb, CGI-laden box-office wonders like The Day After Tomorrow, Godzilla, and Stargate. Some of his titles entertain more than others (The Patriot), while many are overrated and overblown blockbuster archetypes (Independence Day). Always present are scenes where crowds run from some disastrous happening, usually in New York City. Be it the Empire State Building going boom from alien rays, a giant roaring iguana toppling skyscrapers, or ocean waves flooding its streets, Emmerich apparently hates NYC (perhaps the FBI should investigate). Luckily, The Big Apple remains intact with his latest film, or at the very least, not yet existent. Maybe in his next film, he’ll destroy the city twice to make up for not destroying it here.

He’s understandably been accused of trailing behind Steven Spielberg, of blatantly and without an iota of originality following Spielberg’s formula for grandiose entertainment. In the behind-the-scenes documentary Getting Gilliam, visionary director Terry Gilliam (Brazil) goes to great lengths to explain what the term “derivative” means to his Tideland star Jodelle Ferland, using Emmerich’s poor imitation of Spielberg’s established blockbuster style as his prime example. No doubt Emmerich reaches for Spielbergian extremes, but in every instance, he forgets his idol’s devout commitment to heart. Though not wholly a personification of “derivative” as Gilliam suggests, Emmerich’s not breaking any new ground either. One wonders how he keeps going, after making such obviously rehashed dribble over and over.

By the end of 10,000 B.C., Emmerich’s film explains the origins of civilization, agriculture, and astronomy—all breakthroughs described with an unintentionally hilarious sense of the profound. Moviegoers were laughing aloud throughout my screening; admittedly, I chuckled aloud too at the hokey plot and simpleton representation of ancient cultures. If you take children to see this movie, be sure to give a post-viewing lecture on actual ancient civilizations, otherwise, they’ll be stupider for what they’ve seen.