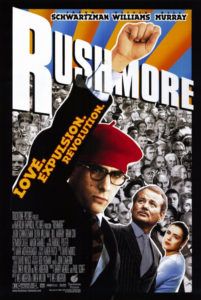 Wes Anderson’s Rushmore revels in the absurd drama of life, the grand theater of false fronts, badly veiled truths, and stanch solipsism. The film’s characters teeter-totter between being comedic or tragic heroes, containing equal parts dry humor and aching sadness. They strive with blind melodramatic showmanship only to be let down by harsh doses of reality. Anderson finds splendor in his characters’ flaws, setting them up to fall short; and when they do, he respects their ensuing growth. He appreciates life’s little failures as poetic and oddly beautiful, capturing those moments on his cinematic stage with vast quantities of comic originality and eccentric humor.

Balancing high ambitions and diminutive results, 15-year-old Max Fischer (Jason Schwartzman) attends Rushmore Academy, a well-to-do private school. Max’s thick-rimmed glasses rest before his bushy eyebrows; behind them his eyes at once show contempt and loneliness, further emphasized by the pompous-yet-pathetic metal smile of braces. A barber’s son, Max wrote “a little one-act about Watergate” in grammar school, earned his scholarship into Rushmore and has hardly lived up to his promise. He excels in extracurricular activities, belonging to every after-school society the institution offers, but his academic rank is the school’s worst. Concealing his inadequacies with arrogance, ambitiousness, and overconfidence, he dwells on his talent by constructing bold stage plays—such as an adaptation of Serpico—in an attempt to mask his displacement and social inelegance. Crisis. Daydreaming about being the smartest boy in class, Max is no longer extraordinary, as his impending academic failures show. The school’s headmaster, Dr. Guggenheim (Brian Cox), threatens to expel Max should he fail another class. Max keeps his cool, “Can I see some documentation on that, please?” His relationship with Guggenheim seems to feed on Max’s ever-constant need for vindication, yet he would deny such a need exists. On every school team and foundation, Max’s passion is Rushmore, where, being the underdog, his very presence signifies that he is special.

Anderson co-wrote Rushmore’s script along with Owen Wilson, inscribing theatrical sensibilities onto every adolescent character, illustrated in Max’s mature plays performed by youngsters. Much of the film’s humor derives from the irony of children speaking like adults, not that they pretend, but rather they take themselves seriously enough and remain intelligent enough without grasping the irony of their stations. Consider Max’s forced vernacular, desperate to assert his intellectual veneer, each line articulated with the gravest, most overwrought, hilariously silly self-important magnitude. Trouble is, his snide behavior is backed with confidence and ability, and even some unhealthy delusion, making him the worst nightmare of his enemies. Seemingly never aware of his inherent irony, Max’s behavior is at once embarrassing and joyously amusing to behold. Anderson’s brand of humor rests in characters enthusiastic about the small time, without ever realizing their emotional and creative limitations. Perhaps because they have very few, except those they make for themselves. Anderson has a genius for constructing characters both emotionally tangible and yet almost cartoonish. For some characters—such as Max’s young apprentice Dirk (Mason Gamble), who etches a deceptive setup letter in blue crayon and ambushes his enemies in wizard Halloween garb—their continued quasi-grown-up awareness does not conflict with their nature. For Max, Anderson outlines a persona consumed by his own drive toward adulthood through the illusion of superiority, in spite of his failures and misaligned place at Rushmore Academy.

Throughout the film, he pursues the plainly attractive first-grade teacher Rosemary Cross (Olivia Williams). When she admits her husband drowned a year ago, Max tells the widow of his dead mother, “She died when I was seven… So we both have dead people in our lives.” His schoolboy crush goes much further, fixating onto her, deluding himself to discomforting degrees in an attempt to woo her, while slowly it becomes clear he’s trying to replace his mother. Rosemary finds another suitor in wealthy industrialist Herman Blume (Bill Murray), who Max compliments on his speech to Rushmore’s finest: Blume tells them to take “dead aim” at the rich boys, earning raised eyebrows from the elitist audience, save for Max, who respects Blume and his message. And yet afterward, Max curiously lies to Blume and claims his father (Seymour Cassell) is a brain surgeon. Blume thinks Max has it together. The truth is, of course, far from it. So what does that say about Blume?

In effect, Blume is an older version of Max, with an adult’s schoolboy crush on Rosemary. When this blossoms into a full-fledged romance, Max wages war. He informs Blume’s wife of her husband’s infidelities, and when she files for divorce and sends Herman to take up temporary residence in a posh hotel, Max plants bees into Blume’s room, and later cuts the break line on his car. “War does funny things to men,” Max insists, and then writes the ending’s pyrotechnics-laden war play Heaven and Hell in honor of his battle with Blume over Rosemary, using the Vietnam conflict to underline the illusion of progress in fighting an inner battle outwardly. Going through a painful divorce, realizing he has nothing in common with his twin teenage boys, and stricken with a doleful case of woebegone ennui, Blume is so perfectly captured by Bill Murray, who gives his finest performance. Multilayered in his construction beyond what the script allows, Murray’s facial nuances, his little smirks and upturned eyebrows, the way he dashes away from an encounter with Rosemary like an excited child on his way home for cookies… We see Max in forty years.

Likewise, Schwartzman masters Max’s wonderfully sarcastic behavior, tempered by the actor’s ability to shrink away Max’s omnipresent conceit and display tender vulnerability. Max’s riotous talent for distributing an entire library of cocky comebacks is not merely smart-assness thanks to Schwartzman, but a fragile defense that comes crumbling down when Rosemary rejects him. Curiously, she rejects Blume on the same basis. In the final scene, after the love triangle has reconciled, Rosemary removes Max’s glasses and looks upon him. She sees her dead husband; Max sees his mother in her. And now that any sexual tension that once existed is relieved, Schwartzman lends Max, for the first time in the movie, a childlike exposure.

Rushmore is a comedy that works just as well as a drama, in that the characters sulk in unwavering melancholy throughout. Max finally must accept his lacking maturity and deficient experience to attain some level of self-understanding. Subtract Anderson’s signature offbeat humor and unconventional tone from the filmic equation, and suddenly the irony subsides, and the film becomes pure drama. Instead, the film proceeds on multiple planes as Max struggles to accept that he does not belong at Rushmore Academy, and that he cannot live up to the expectation of his presence there, only his own ability. The film suggests Max’s Rushmore fandom begins at a young age, when his mother enrolled the boy in private school. Aspiring to live up to her wishes, he types away in his backyard where the cemetery housing her grave is right over the fence, serving as a constant reminder. Notice his typewriter case that reads, “Bravo Max! Love Mom.” Max’s affinity for writing and directing school plays is an accomplishment he puts before any other. When a doctor (Luke Wilson) admits to attending Harvard, Max replies, “Oh, that’s great. I wrote a hit play and directed it, so I’m not sweating it either.” Consider how Max’s life is vindicated by the success of his first childhood play, and desperate to retain that justification, perhaps in honor of his mother, he acts out the everyday with all the expressiveness and drama of a stage actor, a notion further exemplified by Anderson’s treatment of the story as “the theater of life.”

Listen to Max’s ongoing dramatic rhetoric and this becomes blatantly true. His father compares Max’s relationship to Rushmore like a clipper ship married to the sea. “Yes, that’s true,” Max reflects. “But I’ve been out to sea for a long time.” Embarrassed by his identity, struggling to conform to the expectations of his mother, Max reaches high and misses: “Pipe dreams, Dad,” he declares of his potential triumph, “I’m a barber’s son.” Moments of dramatic closure or transition feel as though a curtain should close on them, and indeed, this occurs as a cinematic-stage device. Various colored curtains open the story’s months, each an intermediary passage as the players prepare backstage for the next scene. Anderson himself attended an elitist prep school, St. John’s School in Houston, Texas, and filmed Rushmore at his alma mater. In his time there, the young director used the school’s auditorium to present his own generously detailed plays, such as The Battle of the Alamo, and like Max, was expelled and forced to attend public school. Anderson’s evident class spite, jealousy, and resentment toward prep school types comes through in the film, and in the majority of his work, which often examines the privileged and describes their limitations. Such were trademarks of Ernst Lubitsch (Trouble in Paradise) and Preston Sturges (Sullivan’s Travels), two filmmakers from early Hollywood Anderson cites as influence, both of whom sought to satirize social highbrows.

Though Anderson’s films are not satire, not exactly, each exists within its own reality constructed from the director’s unique signatures. Titles appear in standard Futura Bold. The soundtrack, frequently British rock, informs both picture and tempo, as Anderson frequently plays out scenes in slow motion to allow a graceful marriage of song and image. Colors are almost unnaturally bright; dominant reds and blues and greens seem chosen from a crayon box. Each character is defined through a series of gestures and expressions, speech mannerism, and like a play’s characters, they are singularly decipherable to us through their appearance or a single line of dialogue. Combining poignant emotions and the driest of humor, Rushmore, and Anderson’s ongoing career—beginning with Bottle Rocket, and continuing through The Royal Tenenbaums, The Life Aquatic with Steve Zissou, and The Darjeeling Limited—render him the most original cinematic auteur working in comedy today.  Pinpointing exactly how Anderson accomplishes what he does with the film is a matter of dissecting every detail, something impossible in a mere appreciation, because the film itself contains a graspless energy and pitch that must be experienced, as they remain original to the genre. His artistry derives from several components making a unique assemblage that just feels right, even magically perfect in consideration of the varying elements at work in every one of his films.